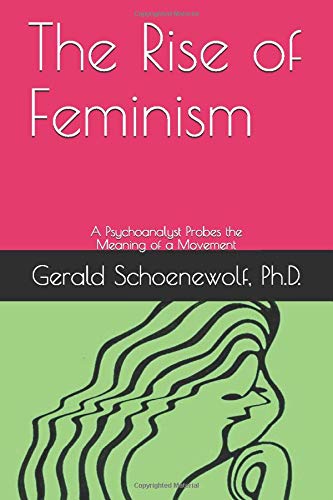 The Rise of Feminism

A Psychoanalyst Probes the Meaning of a Movement

From the author of THE RISE OF FEMINISM:

“Over the last 100 years, feminism has captivated American culture.  It has become more than a political movement; it has become a way of life and a new morality to many, and those who speak out against the feminist doctrine are seen as engaging in hate speech and proclaiming themselves to be culturally backwards.  How did feminism get to this place?

“As a psychoanalyst, I have a commitment to search for the truth in the histories of my clients.  As a member of society, I have the same commitment to examine the truth about a culture--in this case, the history and psychology of the women’s movement.  In looking at the formative years of feminism, I am interested in its stated goals (its conscious mind) in comparison to its ultimate consequences (its unconscious byproducts).

“As a man, I have felt hurt by the constant trashing of males that is part and parcel of the feminist movement.  As a human, I am concerned about the demise of gender balance caused by feminism: that is, the idealization of one gender and the demonizing of the other.  I am also concerned about the effect of this imbalance on the family, child-rearing and on the quality of life.

“I believe the time has come for a book such as this to take a backward glance at one of the most powerful political movements of our time.”

Gerald Schoenewolf, Ph.D. has lived two lives.  The first life was an angry and unsuccessful attempt to find love and balance in the midst of chaos. In the second, he became a licensed psychoanalyst in New York, where he has had an office for over 45 years.  He has also been an adjunct assistant professor at the Borough of Manhattan Community College for seventeen years. He authored fourteen books on psychoanalysis, psychology, and philosophy; wrote and published five novels; wrote and illustrated a book of poetry; translated and illustrated a book of Daoist philosophy; and produced, wrote, and directed two feature-length movies and a volume of video song poems.  He currently lives in the Pocono Mountains of Pennsylvania. with his wife, Julia.

The Landmark Book of This Generation
"A lot of books have come out in recent years that attempted to make sense of the feminist movement, but this book does the best job at understanding
it on the deepest level, which is the psychological level.  The brief history is thoroughly enjoyable in and of itself,'it reads almost like a Dickens novel, combining
professional research and personal anecdotes of the author's experiences at feminist events and with feminists at the New York college where he taught for
seventeen years.  The rest of the book is a collection of the essays he wrote about feminism, which strikingly show how feminism started out as a simple movement
by a few women who wanted to vote and other rights so as to put them on par with men.  But over time, from the first wave to the fifth wave, feminism
became more and more radical, and as it became more radical it became narrow-minded and tyrannical.  I particularly like the 'Job Description for a Mother'
in the last chapter, because I do think we need to restore good family life and good parenting to our society.  I highly recommend this book,
both because I am the writer's wife and because I genuinely think it is one of the most pertinent works of our time."
--Jin Rong Liu

An Objective Look at Feminism

"This book seemingly comes out of nowhere and hits you squarely between the eyes with its powerful descriptions of feminist antics and twisted reasoning.

It is written by a New York psychoanalyst, who has been researching feminism for many years. It starts off with a 100-page history of the movement from the early 20th

Century to the present, which details how, from the first to the fifth wave, feminism became more and more radical and closed-minded.  That is followed by a section

called Analysis, which looks at things like sexual abuse, psychoanalysis, feminism in the workplace, feminism and hysteria, and the rise of mass killings.

It concludes with a check of feminists claims (such as the wage-gap) and debunks all of them.  Arguing for a return to conscientious parenting, the author

includes a wonderful job description for Mother, which is two pages long and is a thing of beauty in itself.  One of the things that makes the book so striking

is that he examines feminism from both a professional and personal level, and the history is replete with dramatic anecdotes about the author’s own

encounters with feminists.  As a psychoanalyst, he sheds light on how American and world culture became intimidated by feminist radicalism and how

intellectuals in academia lost their minds and yielded completely to the simplistic rhetoric of feminism. I found the book riveting and could literally not put it down.

Of course, it is a controversial work that will be hailed by some but reviled by feminists, but it is definitely a “must read” for independent thinkers. This book establishes

the author as one of the rising tide of psychologists, and social critics who have expressed criticism of the excesses of feminism—including

Jordan Peterson, Janice Fiamengo, Ben Shapiro, Paul Elam, Christina Hoff Sommers, Cassie Jaye and many others.  It is definitely a “must” read."

5.0 out of 5 stars on Amazon.com
Amazing Addition to the Psychoanalytic Literature.

"Wow! This book is fascinating, interesting, and controversial. I appreciated the author's psychoanalytic interpretation of feminism from both a professional
and personal level.  What is also interesting is the history mixed with dramatic anecdotes about the author’s own encounters with feminists.
Kudos to the author for this brave endeavor."
--James Phelan, MSW
5 out of 5 stars on Amazon.com/UK

A Movement That Went Astray

hegemony over the whole of our society. In both respects they have been spectacularly successful but in doing so have created a deeply divisive ideology that has fueled

damaging gender animosity.  Gerald Schoenewolf has written a powerful indictment of the manner in which feminism has evolved that will be uncomfortable reading

for many women but should be equally disturbing for men whose acquiescence in the excesses of this process has been both shortsighted and gutless.

some of the absurd aspects of the drive for 'equality'. It should also be noted that these attacks on feminism are not attacks on women but simply upon the ideology itself.

All in all, he has written a challenging book that provides much to ponder on."

"When I first saw this volume, I wondered whether it was just going to be another criticism of feminism by someone acting out their sour grapes.

But once I started reading it I realized this was a different animal.  This is a work by a seasoned psychoanalyst and it lives up to his promise of probing the

meaning of a movement.  The brief history pulled me in from the beginning.  It was interesting to understand feminism as it unfolded, from

the 1930s to the present.  It documents the people who carried the movement forward and those who were left behind when rifts

developed between the increasingly radical members of NOW and the more moderate members.  I found the essays fascinating, particularly

the chapter on 'Checking Feminist Claims,' in which Dr. Schoenewolf debunks each of the movement's claims over the years, such

as the wage gap and the so-called rape culture.   An illuminating read!""